What is a ‘Woonerf?’ And what will it look like at Riggs Park Place? What comes to mind when you hear the word ‘woonerf?’ The sound you hear as a tennis ball flies by? A special language in which only dogs can communicate? Not quite. A woonerf is a European-style shared street, designed to allow drivers, cyclists, and pedestrians to share the space, making the street much more welcoming, appealing, and safer for everyone. Generally free of traffic lights, stop signs, or curbs, woonerfs open up the streets and allow for every use simultaneously, making travelling from point A to point B a more social, slowed down process.

History of the Woonerf

Dutch for ‘living street,’ the concept of the woonerf was developed in the 1960’s in the Netherlands. As the area developed around their quiet neighborhoods, residents started to become frustrated by the amount of high speed traffic through their once peaceful streets. City planners soon replaced brick streets with winding pathways, where people could travel to and from their destinations in a more leisurely fashion, stopping to engage with neighbors and become more aware of their surroundings. Low speed limits and easier walkability opportunities also created a safer environment for those travelling by foot, car, or bike. People became the primary focus, instead of vehicles, and now the Netherlands have introduced roughly 6,000 woonerf zones.

At the heart of this urban design tool is the concept of human interaction. It’s no surprise that the community who created the idea of hygge were the first to implement a street that was focused on the quality of life rather than speed.

It wasn’t long before other countries and communities across Europe started to implement their own versions of these shared streets. Cities like London, England, Auckland, New Zealand, and Norrkoping, Sweden all have different versions of the woonerf throughout their neighborhoods and now in the United States, more than 400 cities have introduced this concept to their communities and designs - including Washington, DC and Riggs Park Place.

The Woonerf at Riggs Park Place 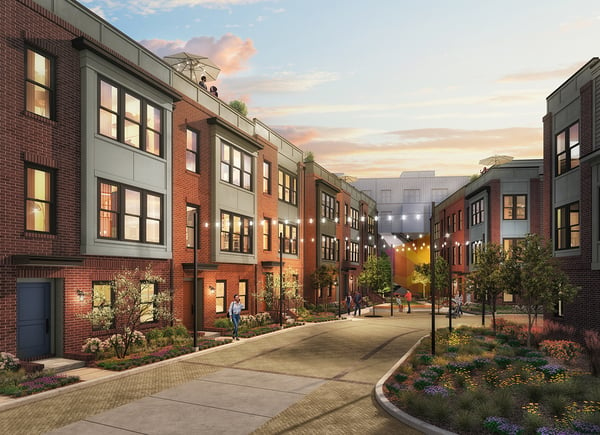 At EYA's newest Washington, DC community, Riggs Park Place, the concept of the woonerf will be used to connect the community in a new and unique way. We spoke with EYA's Senior Vice President of Planning & Design, Jack McLaurin, for insight into the inspiration behind the design and what will make this woonerf special for this community.

What inspired the team to include a woonerf at Riggs Park Place?

Jack: A woonerf concept was utilized on this site to create a stronger, more tight-knit community. The more compact and walkable a street is, the more people can live and socialize together, resulting in more shared space for the community to enjoy that is not dedicated to the car. With winding pathways and the mixed-use purpose, cars are forced to drive slower with minimal traffic controls, ultimately allowing pedestrians and cyclists to take priority over the road. Woonerfs are therefore designed to allow cars but not designed specifically for cars.

What will the woonerf design be like at Riggs Park Place?

Jack: The woonerf will be designed with traditional paving in combination with accents and borders of colored specialty paving to help emphasize pedestrian zones and edges. This will give people the familiarity of a traditional street, while cohesively blending all of the uses together. The woonerf will also be well lit and bounded by significant trees, landscaping and community gathering spaces.

What will make this woonerf special?

Jack: This woonerf will be special as our goal was to rethink a typical residential street’s design using the principles of a woonerf, turning what would have been an unattractive urban street into a more pleasant streetscape where children can be comfortable playing within close proximity to their front door, and parents can rest easy knowing they are away from busy streets and traffic.

The street is designed without a clear division between pedestrian and auto space, so motorists are forced to slow down and travel with caution. Limiting vehicular speed not only improves residents’ feelings of safety, but also promotes greater use of the community’s public space. This allows more room for new features in the street such as street furniture, planters, street trees, and benches, creating more opportunity for social interaction and bringing more people out on the streets to walk, bike, and play. In other words, this woonerf will transform the street into a livable and attractive environment for the entire community.

For those of us with a few more years under our belt, there comes a time when we start thinking about the next stage in life. Whether the kids are off to college or retirement is just around the corner, many of us shift focus to how we want to live – and where – during this exciting new chapter. Moving into a new home is often the first step, giving you the chance to start fresh in more ways than one.

Dear Friends of EYA, 2021 turned out to be an incredible year. As it began, we were all concerned about what the future would bring. It seemed we had survived the worst of the pandemic, adapted to working remotely, and retooled much of our operations, especially sales, to a virtual world. We were optimistic about the future vaccines and the end of the pandemic. As 2021 progressed, the incredible development of the vaccines and the warm summer months brought a renewed sense of hope for a return to normal. In reality, it turned into a new normal. This new normal included variants that brought back Covid fears and renewed business uncertainty exacerbated by supply chain woes and challenged delivery schedules.