Take a Scenic Trek along the Capital Crescent Trail 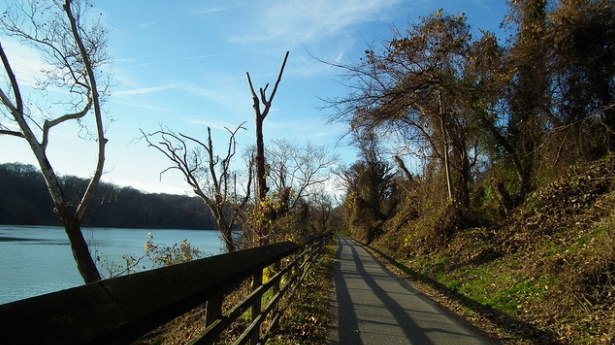 Have you ever wondered what you pass while enjoying a nice walk, run or bike ride from our townhomes at Little Falls Place to Georgetown? Thanks to the Coalition for the Capital Crescent Trail, here are a few of the highlights along the way:

Mile 5.0 – Loughborough Mill, named after John Adam’s Secretary of Treasury, Nathan Loughborough, marks where he built a mill in 1830. The mill was later reportedly destroyed during the Civil War.

Mile 6.7 – An original stone district line boundary marker behind a small fence. These stones were used until the land southwest of the river was given back to Virginia from DC.

Mile 8.2 – Abner Cloud House, built in 1801 by Abner Cloud, is the oldest standing structure along the C&O Canal.

Mile 10.5 – Francis Scott Key Bridge, named after the man who wrote our nation’s Star Spangled Banner, connects Rossyln and Georgetown and pedestrian trails on both sides of the river.

Miles 10.5-11 – Your destination! Georgetown Waterfront Park and the Washington Harbour, preserved by the National Park Service, is home to many acclaimed restaurants and adjacent to all the exciting Georgetown shops.

To learn more about the mile markers on the Capital Crescent Trail visit Points of Interest on the Trail and the map.

Already 65% sold out, EYA’s townhomes at Little Falls Place offer residents unparalleled luxury in a quiet park-like setting with direct access to the Capital Crescent Trail. The townhomes feature private elevators and rooftop terraces unlike anything else in the area, with stunning outdoor kitchens and fireplaces.

Now more than ever, we’re looking for more ways to get outside, stay active, and get some fresh air, without venturing too far from home. From sunrise to sunset, visitors are invited to explore the 528-acres of inviting woodland trails, sports fields, picnic shelters, playgrounds, and more at Cabin John Regional Park. Throughout all four seasons ice skating, tennis classes, camps, recreational sports and more are just a few of the activities held in this quiet oasis just steps from the lively shopping, dining, and entertainment opportunities at Cabin John Village.

We are pleased to announce that our model homes at Tower Oaks are now open for private tours. The three newly furnished models, the Bailey, the Carter, and the Drake, are available to tour and open by appointment. Schedule your appointment to be among the first to visit these brand new model homes and learn more about this exciting new Rockville, MD neighborhood.